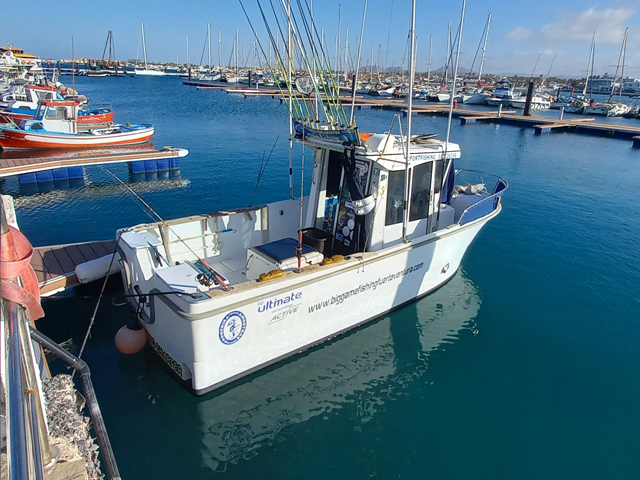 Hello, my name is John, and this is my Big Game Fishing Corralejo experience.

I live in North Yorkshire in the UK, I love fishing. Back home stocked ponds are great but I prefer the wild. Especially pike, or anything challenging.

I’ve never been on an ocean going trip but on a recent visit to Fuerteventura to visit a mate I ticked it off the list. Normally I never comment or post “look at me” pics – only ever as a laugh but I had to write this one up as a great experience.

Having fished for many years, like anything else if you do it for long enough, certain aspects can become more mundane or repetitive. Not necessarily boring but not as exciting as they once were.

This tour came well researched and recommended but I entered with an open mind and no real expectations. Obviously, I thought it would be nice to make a catch or two. Perhaps something large, but only as a vague possibility. Definitely exciting though!

My friend booked Big Game Fishing Corralejo, he’s not a fisherman by any means, he fished a few times as a youngster, but nothing for over 25 years. 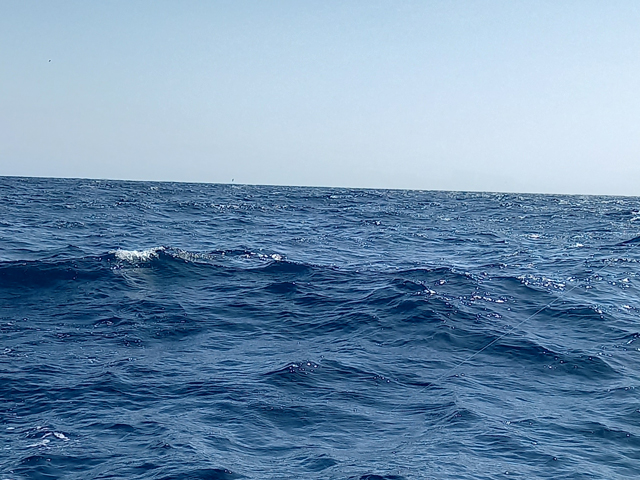 We set off at 7:45 aboard The Resacca “Spanish for Hangover”.  What I would say at this point is the boat is small but don’t let that put you off, all it means is fewer people. A small boat like this doesn’t make the sea any better or worse than a much larger boat say 5 times the size. If there’s a wave they all lean and list just the same. I would also like to point out that even on a fairly calm day, once you leave the harbour it can be choppy, if you don’t have sea legs, or you suffer from motion sickness or sea sickness, this could trigger it.

Fortunately my mate and I were fine, another man and one of his two young sons were not so well. They had to endure the full tour as it takes a good 20 mins before your first casting point. We both felt bad, he was a nice guy and his two lads were very pleasant and polite, the youngest was fine with it and enjoyed it, he was smiling and chatting away.

After reaching the hot zone – this boat is equipped with fancy radar that’s all but guaranteed to find fish and we were soon trawling our lures. The skipper cast 6 rods and it wasn’t long before we had bites. 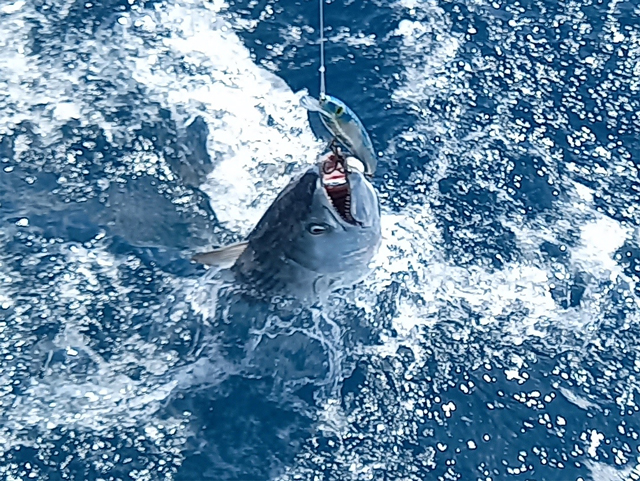 All of us were shocked as 4 rods were all on within a couple of seconds of each other, we must have hit a sweet spot. We pulled in all 4, tuna at around 8 pounds / 3.5 kg each, not massive but fairly large and I can tell you, they’re a powerful and very fast moving fish, this becomes clear as you bring it nearer the boat if it decides to try to turn and run.

Very exciting and challenging and a great first experience for us both. 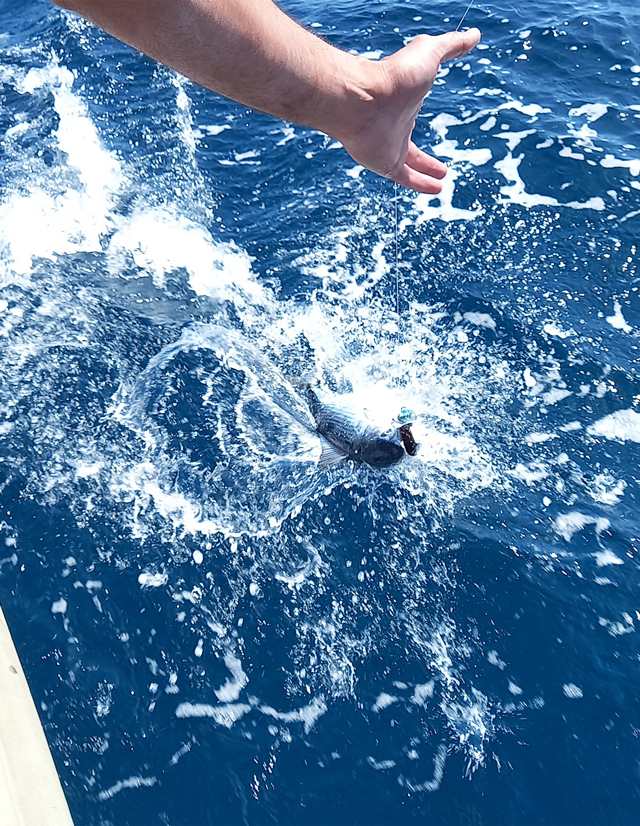 We spent the next couple of hours following the radar, but the hits weren’t as rapid or plentiful for the rest of the trip. I was far from disappointed with this, we’re in the wild after all and it’s always a possibility you’ll catch nothing, I have drawn a blank on many a trip over the years.

During the trip we were offered water, beer, and a ham & cheese roll. We’d packed water, snacks and sandwiches because we weren’t aware anything would be provided, so that was a nice bonus.

The skipper spoke good English, he was entertaining, friendly and chatty. Pointing out fish through the waves. The boat, although small, is well equipped and in excellent condition.

Everything about this trip was great, we thought it was great value for money. We accepted there were no guarantees of a catch but in the end we returned with 8 or 9 tuna, we both got to land a couple of fish.

We also learned that depending on the time of year there are much bigger fish to be caught, so we are looking forward to maybe revisiting this in the late summer.

I am not recommending, reviewing or awarding stars for big game fishing corralejo experience, I am just talking about my personal experience. Very positive, I had a great time. I hope by sharing this you can decide if this is something you would like to do.

Here’s some more snaps of the catches. 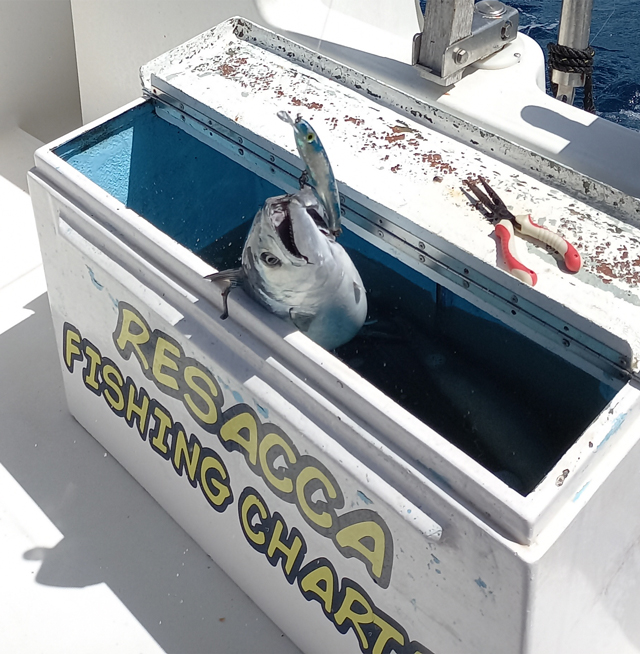 As you can see the boat isn’t that small, there’s plenty of room for 6 people with space to move and reel in.

If you’re not so lucky, there’s at least a great photo opportunity in the harbor and you can act like you caught something! 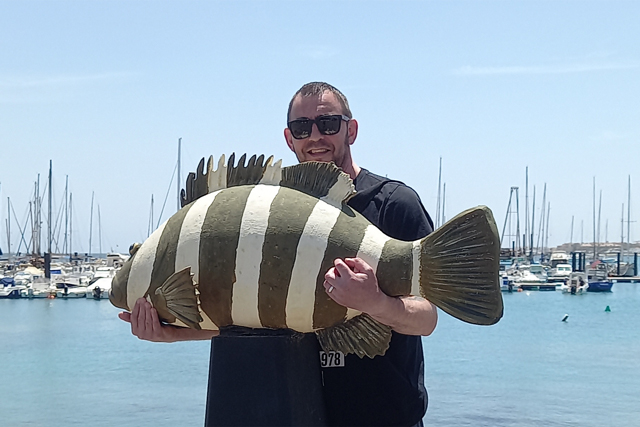 I took a few snaps of the harbour later in the evening, showing all the boats and the masses of fish that are literally everywhere. 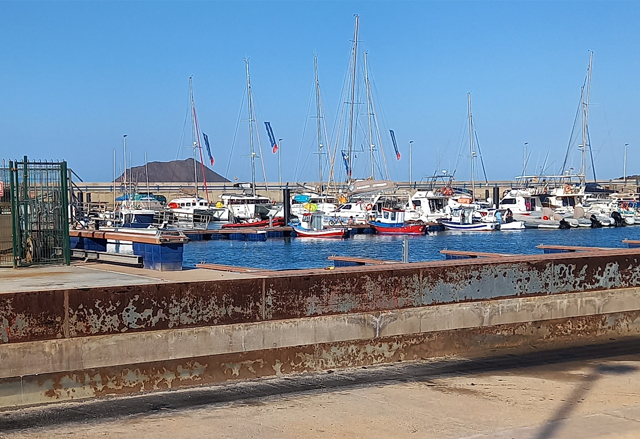 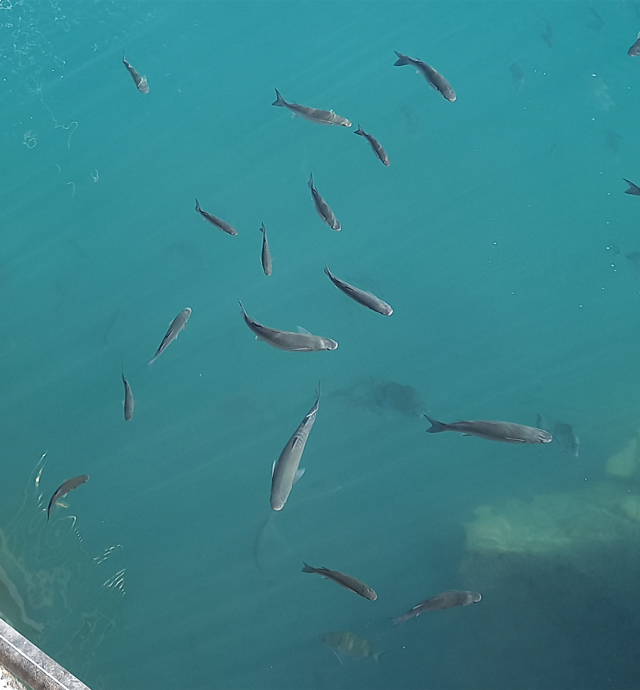 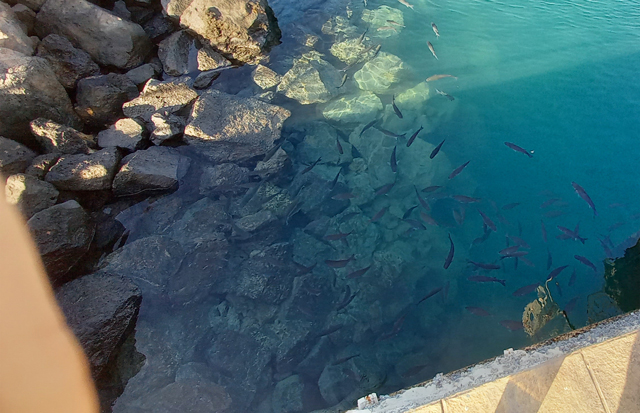 Hopefully coming back together with a few friends nearer the end of summer. I think it’s possible to book a private charter so if there’s 5 or 6 of you it’s great value for money. We’re hoping to catch some larger fish later in the season.

Thanks for reading my “Written by You” submission, I hope you enjoyed it / found it useful. I will definitely write up the next one we do so please look out for that from around September 2022.