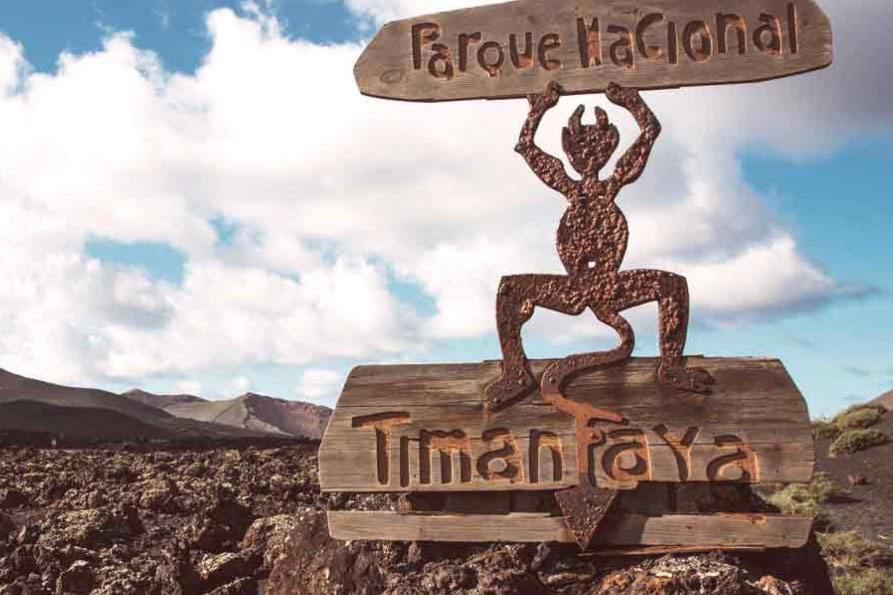 Visit a live volcanic site with professional tour guide or on your own!

A visit to Timanfaya – Fire Mountain Lanzarote on the neighbouring island of Lanzarote is one of the most popular trips here in Fuerteventura. This active volcano is situated in the south of the island. 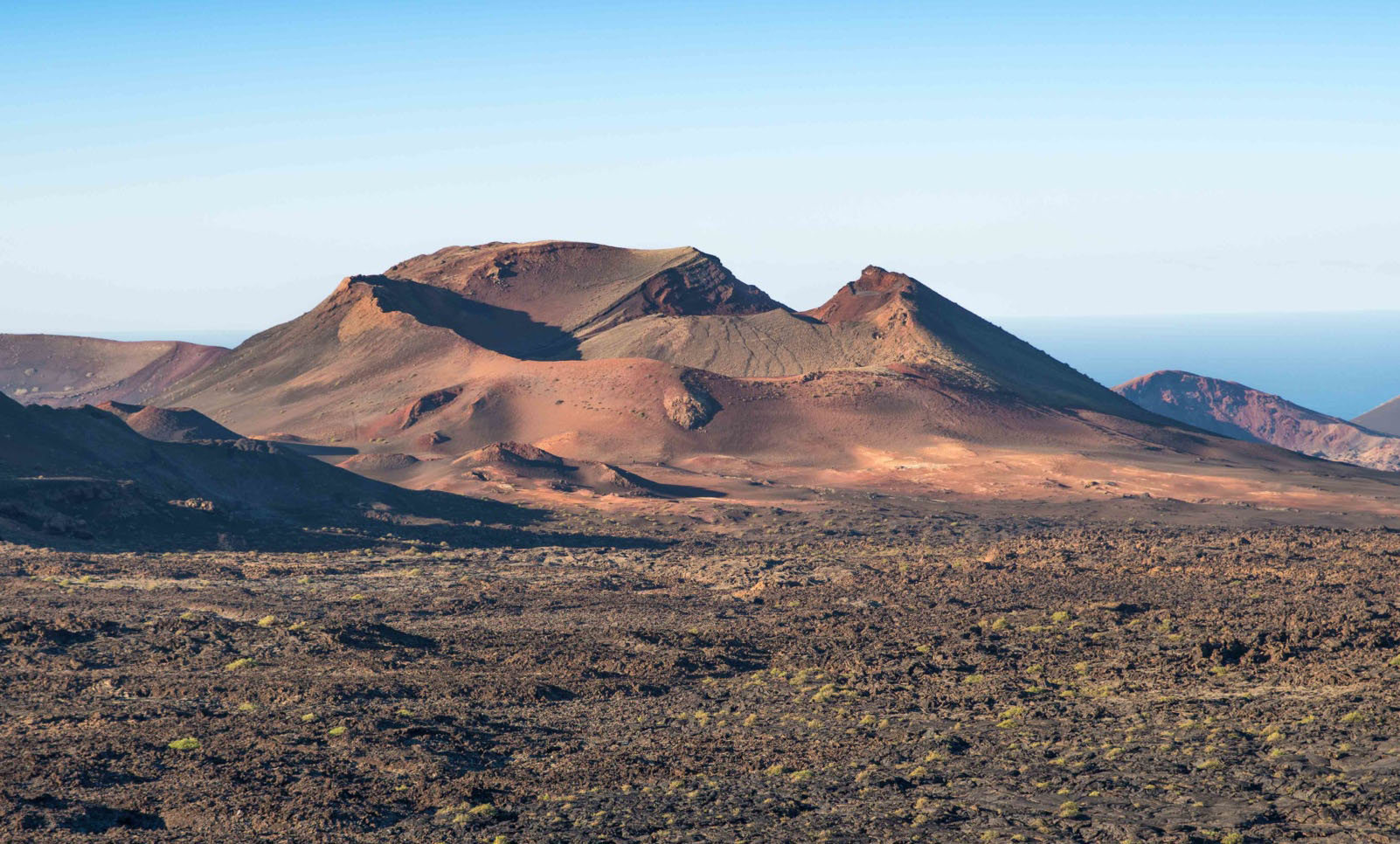 Lanzarote is the second oldest of the canary islands after Fuerteventura. The Spanish invaded and conquered it, pirates made life a misery, but the people of Lanzarote had more to put up with than the deeds of man. 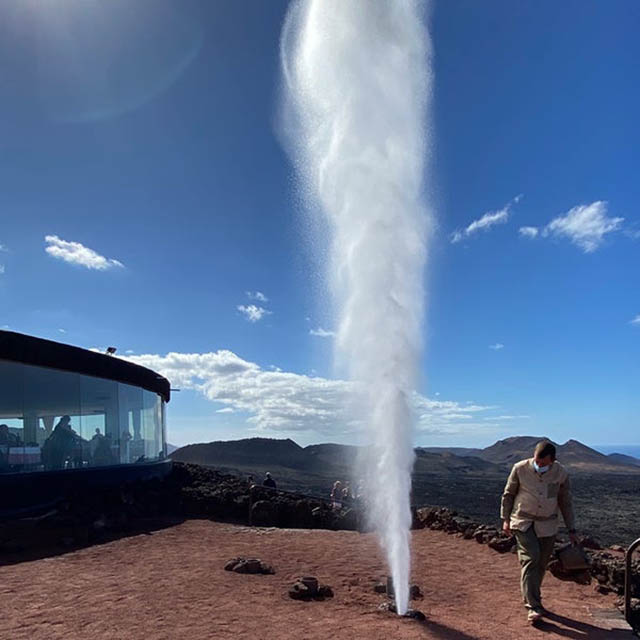 This volcanic field covers an area of 51 square kilometres with an extensive range of volcanoes and craters. It  closely resembles the surface of the moon. Astronauts have been brought to the park to give them an indication of what the moon would be like.

You can’t fail to be impressed by the stunning red, ochre and black lava formations. Colour and textures round every corner indicating how this once fertile land was transformed into a barren wilderness. The lack of rain ensures very little erosion and the park looks much as it did when the multiple eruptions occurred almost 300 years ago.

Despite the hostile landscape there are several species of animals and more than 180 species of rare plant, moss and lichens.  Surviving mainly on organic matter carried in on the wind.

The Fire Mountain experience starts at the entrance to the park where you board an official tour bus and the many ecological sites are pointed out and explained.

Park guides give demonstrations of the awesome temperatures (400 C) just inches below the surface and artificial geysers are created by pouring cold water into the magma chamber located 3km down in the belly of the earth.

The park has a visitor and exhibition centre and a restaurant designed by Cesar Manrique ‘ where your food is cooked over a giant grill heated by the live volcano below. 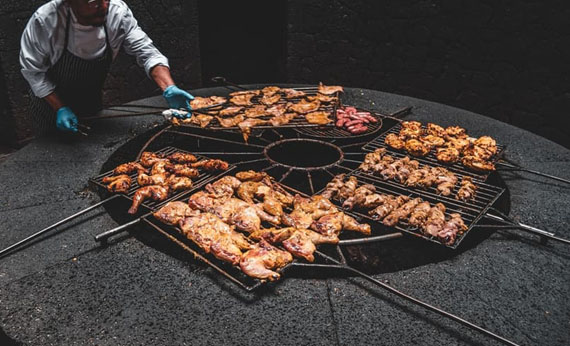 The easiest and safest way to enjoy the thrill of Timanfaya – Fire Mountain Lanzarote is to book an official trip through Corralejo Excursions  As well as the Volcano, you visit a Bodega (vineyard), the Green Lagoon at El Golfo and an Aloe Vera Museum.

If you prefer to go by yourself, opening times are 10am – 6pm during summer and 10am – 5pm during the winter. 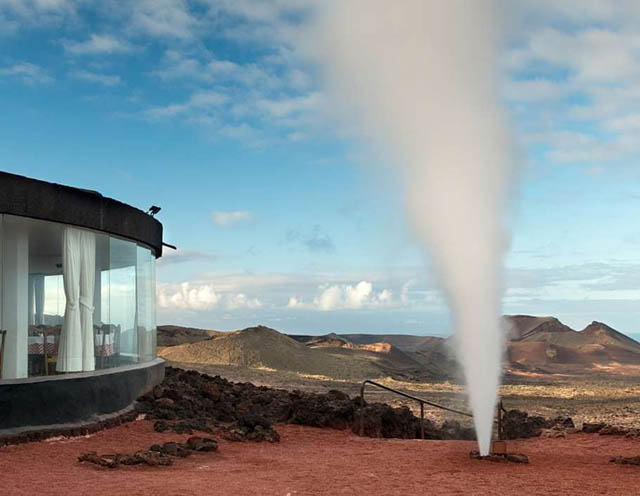 Don’t forget the park still boasts a live volcano so take a pair of running shoes with you….