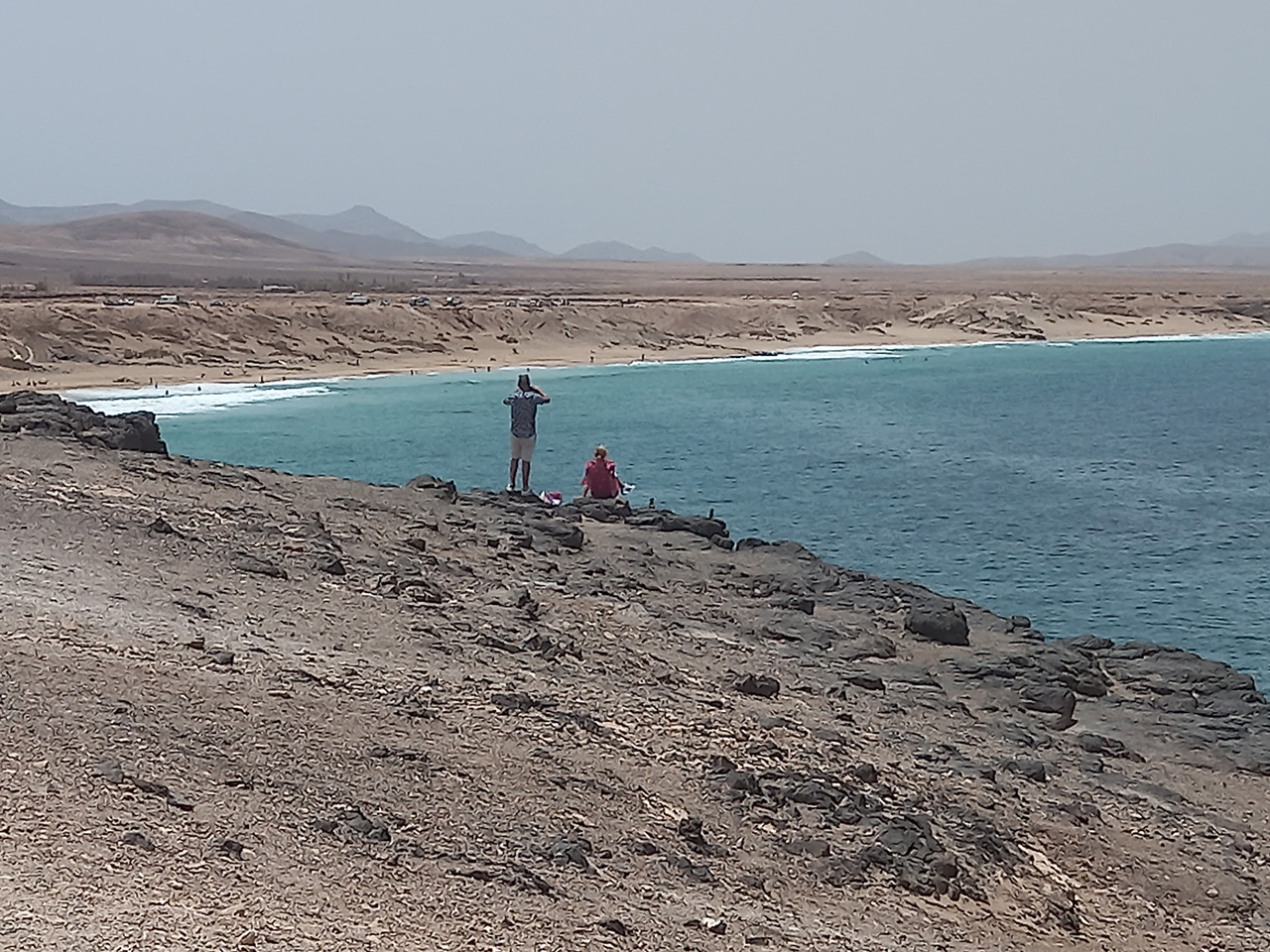 Why is this village the most visited place in Fuerteventura?

El Cotillo is a small village in the North West coast of Fuerteventura. Why is it the most visited place on Fuerteventura?

Could it be the beautiful beaches, picturesque lagoons or rugged coastline? Is it the rich history or the magnificent sunsets that make El Cotillo so popular?

In this article we explore El Cotillo and some of the main features that make this place so frequently visited. 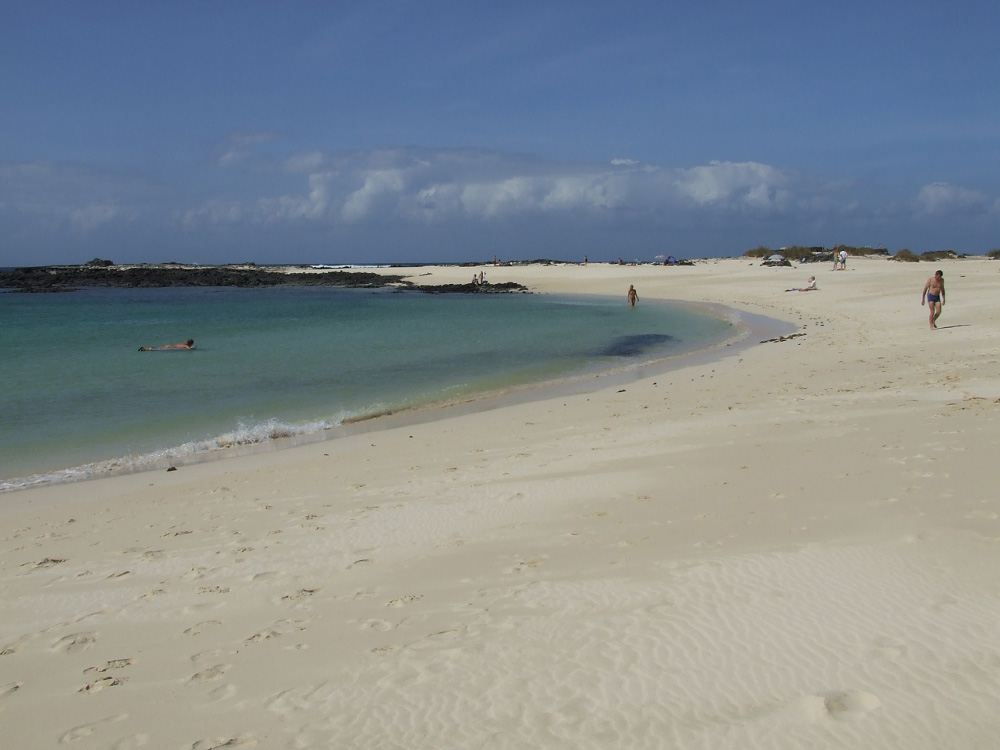 Make your way north up the coast from El Cotillo. As soon as you leave the village you arrive at La Concha. This is a beautiful beach, recently awarded EU Blue Flag status. The relatively shallow bay of crystal clear water warms up quickly. Ideal for swimming and snorkelling.

Further up the coast you will discover the more lagoons each with its own character. The further from the village you are, fewer people are on the beach.

As popular as it is with snorkelers, it’s also popular with naturists. Please keep an open mind when you visit.

Importantly, there are no shops, cafes, bars or kiosks. You need to take drinks and anything else you might need with you. Including a spare bag to take any rubbish back with you. There are no bins here. 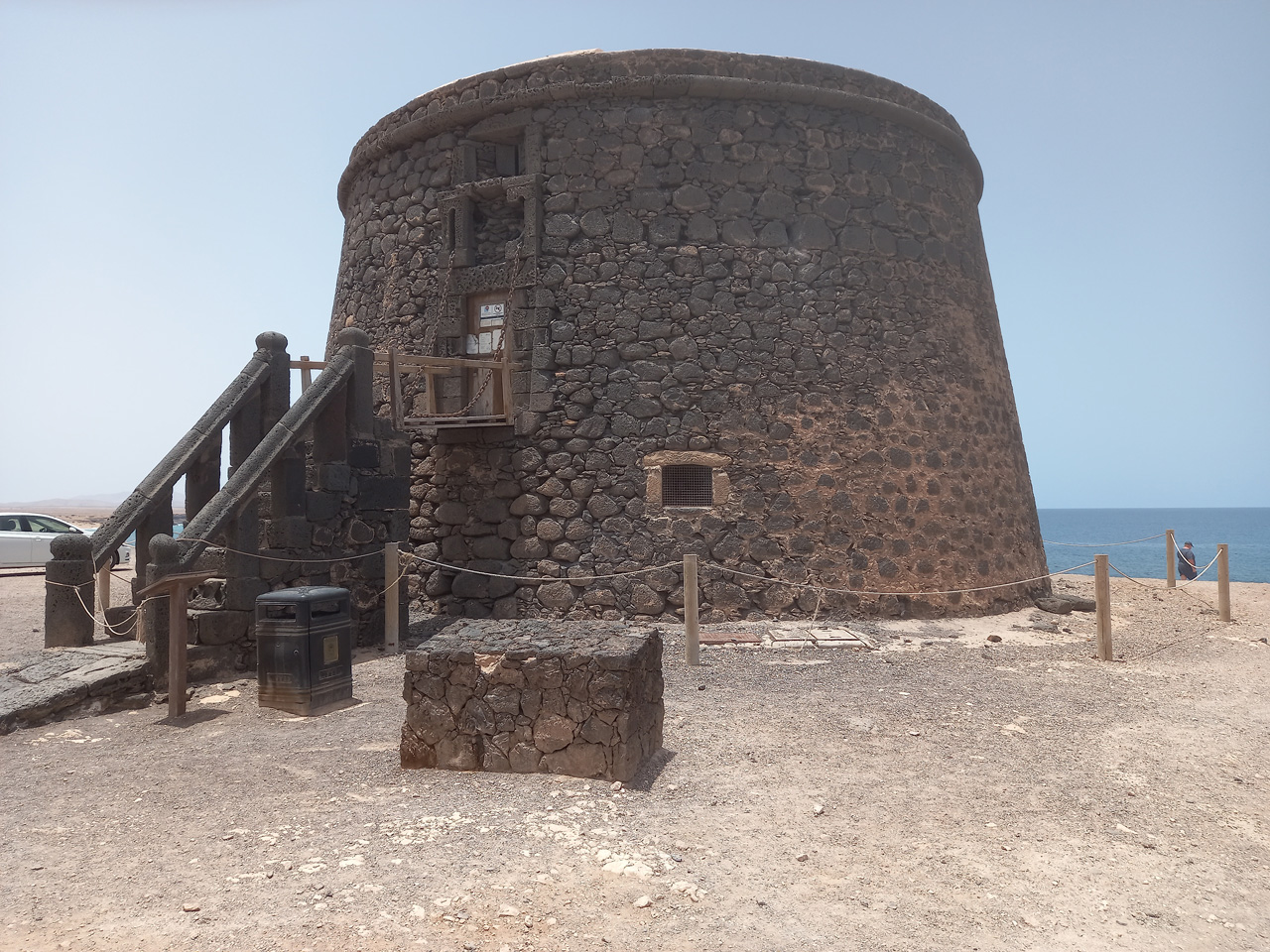 On the very North-west tip of the Island, on Punta Ballena, (Whale Point). Positioned 5 kilometres north of the town of El Cotillo is the El Tostón Lighthouse. Originally, the lighthouse took 6 years to build and it became operational in 1897.  It’s been replaced twice over the years.  The current red and white lighthouse was built in the 1920s.

You can climb to the top of one of the older towers and enjoy the magnificent panorama of the rugged Atlantic coast of Fuerteventura.

The Ayuntamiento have converted the old lighthouse keepers house into a small museum and café. The museum has exhibits of old fishing equipment and many vintage photographs of the village and its fishing industry. Open Tuesday to Saturday, 10am – 5pm its well worth the small entry fee.

To the east of the lighthouse is the western start of the North Shore Road. This takes you back to Corralejo via the small village of Majanicho. Suitable only for 4x4s the road is very rough terrain.

To the south of El Cotillo the coastline is a series of high cliffs. There are wonderful beaches and coves, some more accessible than others.

The most popular Playa del Castillo is the beach immediately south of the village. Boasting reliable waves, sometimes very big and powerful.

Very popular with surfers and kite surfers. There’s plenty of room for everyone. When the Atlantic is producing big waves, this can be a very exciting place. You can catch some of the best surfers on the Island here and be entertained for hours.

Going down the coast there are several more coves and small bays. Again, access can be more difficult with some of these. Playa de la Escalera for instance involves going down a very steep staircase attached to the cliff face, a drop of 50 metres or more, and even though this has been improved recently – I can still not get myself to venture down those steps!

But beware getting to these beaches involves driving on very rough roads, and if you have a hire car you will probably find the contract excludes you from going “Off Road” so if anything happens you could be in for a very big bill. 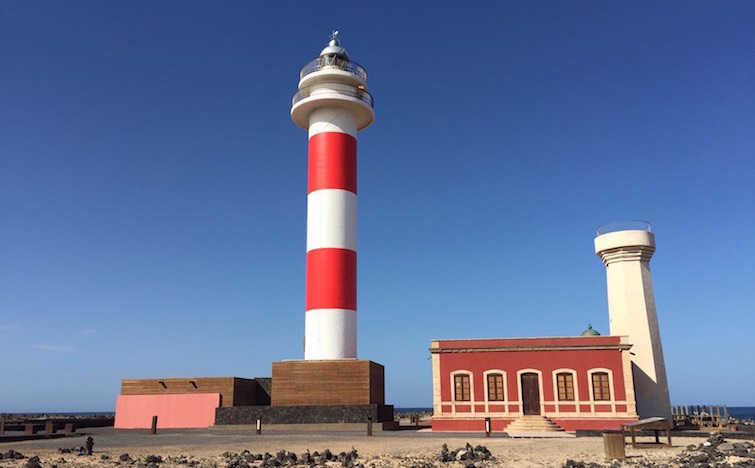 One of the more obvious attractions of El Cotillo is the fortifications that stand overlooking the harbour and the village. Built on the top of a cliff just outside the village, originally by Jean de Bettancourt. Rebuilt and reinforced in 1700 by military engineer Claudio de L’Islecentury. This provided a lookout point to help protect the villagers from invaders and pirates.

El Toston is built from local stone (basalt) and consists of two floors, with the only access via a drawbridge. It had three iron cannons that were used to defend the coast and the boats moored in the port of El Cotillo.

When raiders were spotted the locals would all gather inside this fortress and pull up the drawbridge. They would fire the cannons at the pirate ships. They would also drop rocks, pour various boiling liquids ,including oil and urine,  onto any attackers trying to get into the fortification. The fact that it is still standing intact is a testimony to its effectiveness. 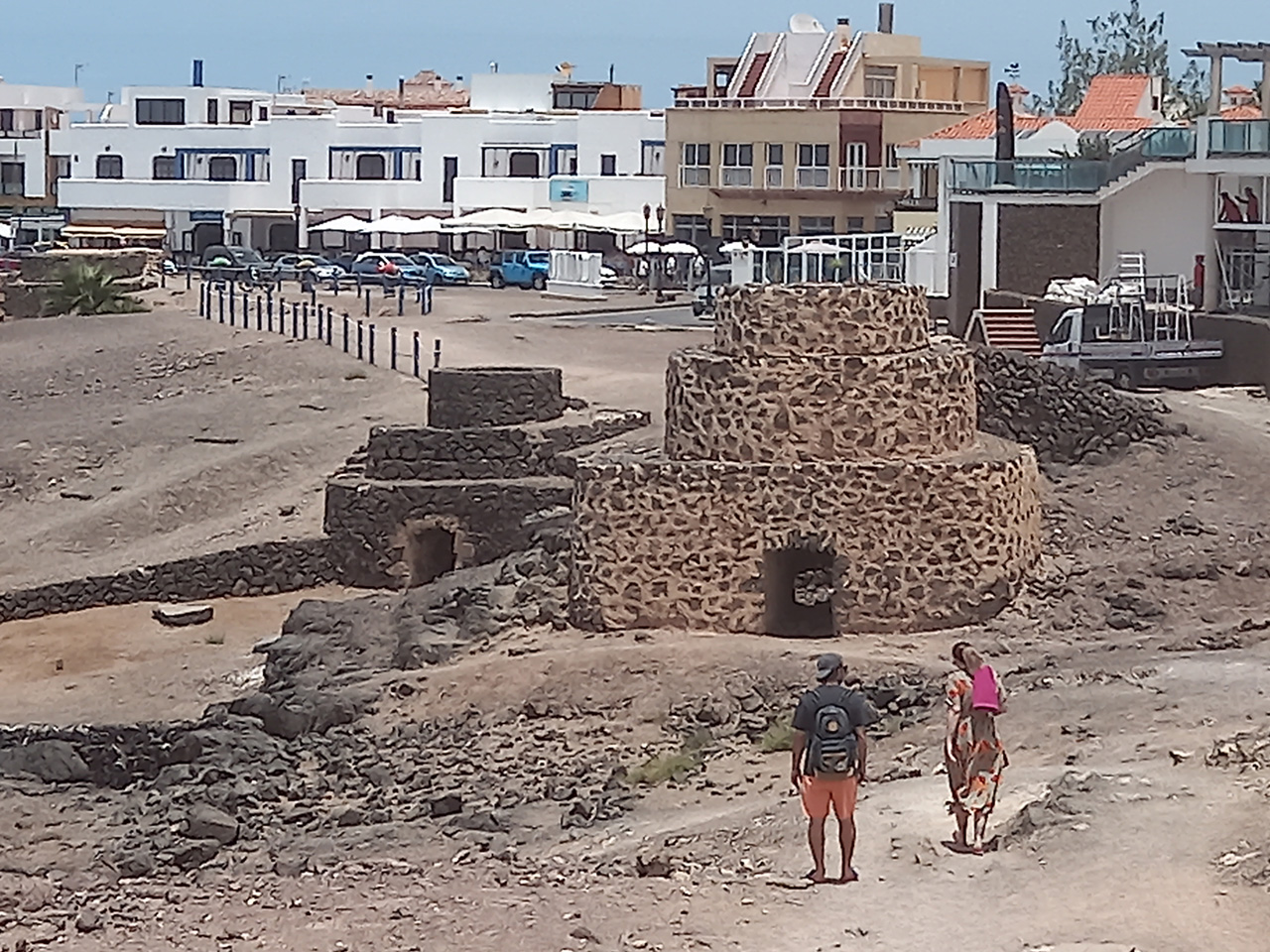 When visiting El Toston you will notice other ancient stone structures, most think that these are other fortifications, however they are in fact old ovens. 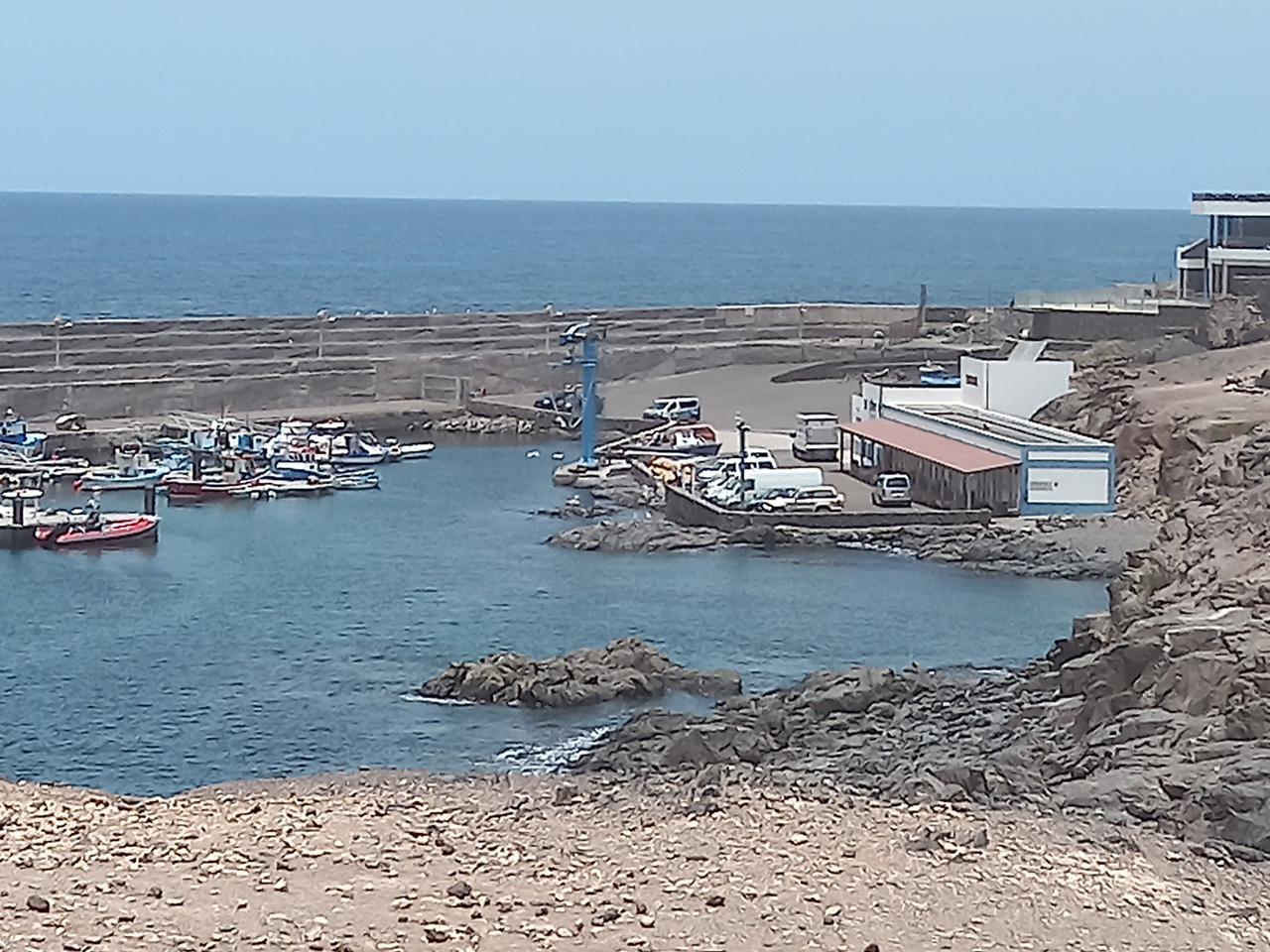 El Cotillo has two harbours, the old and the new.

The Old Harbour and its pebble beach is no longer a working harbour, it is now a focal point for many cafes, bars and restaurants where tourists and locals can relax, You can watch local fishermen casting lines into the sea and then passing their catch to waterside restaurants to be cooked and served to their customers, you can’t get fresher than that! 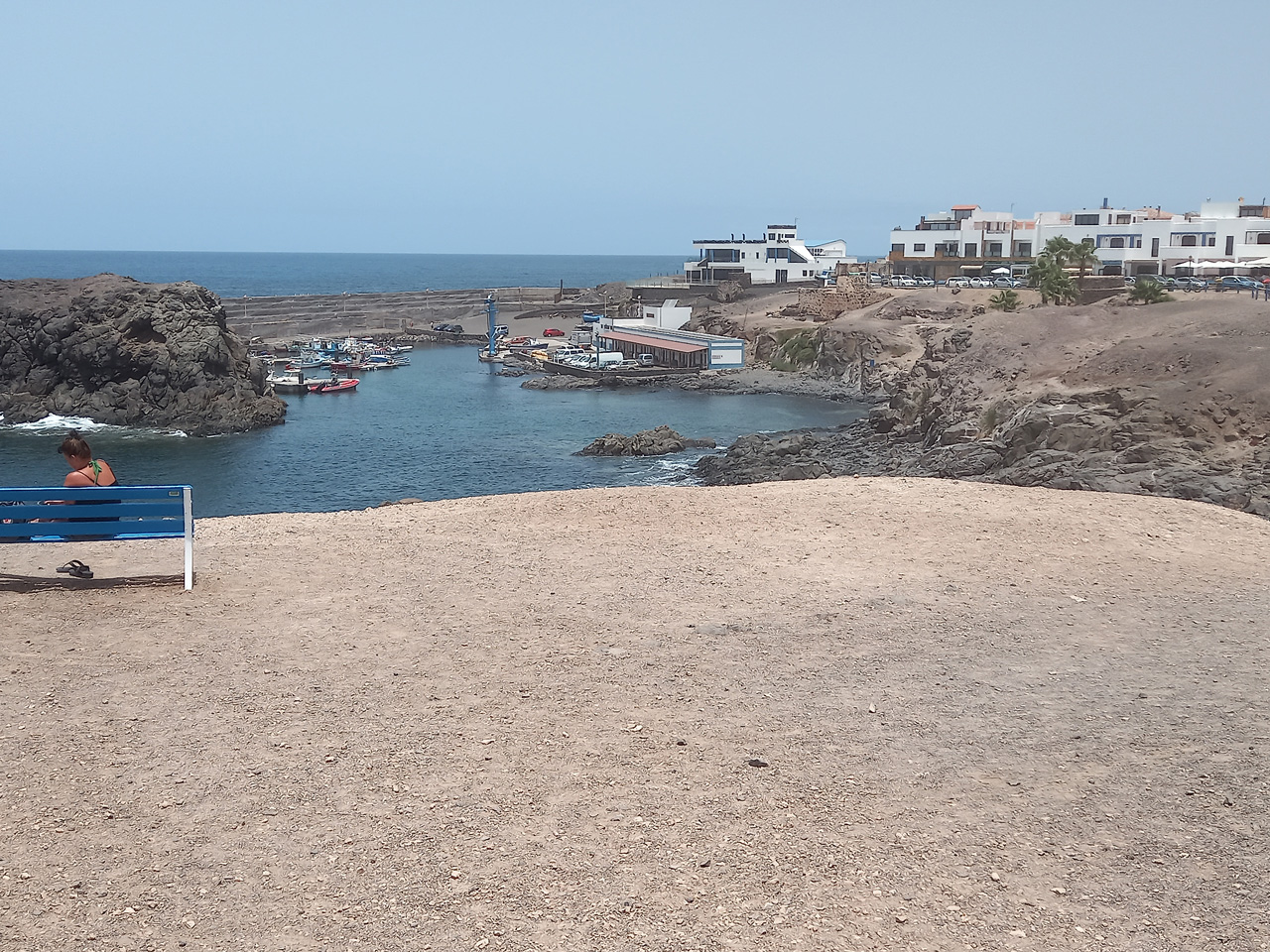 The New Harbour has been engineered and built into the rocks, its high sea wall protects the fleet of small fishing and pleasure boats from the full force of Atlantic Storms.  The local fishing fleet works to supply El Cotillo’s many restaurants with fresh fish. If you like fish, El Cotillo is definitely the place for you.. 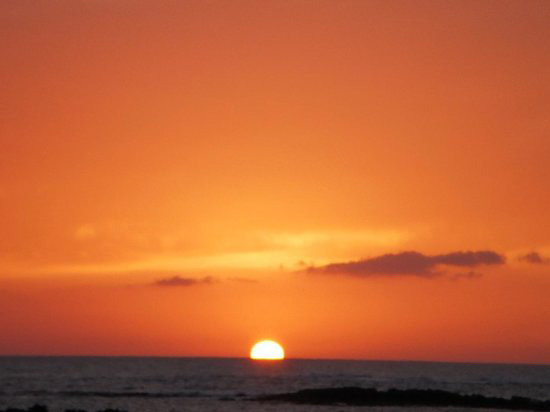 Many people gravitate to El Cotillo in the evenings just to watch the spectacular sunsets. What better way to end the day than to sit with your friends or loved ones, have a drink or a meal and watch the sun slowly melt into the sea. The colours can be amazing, with greens, reds, oranges and yellow streaks covering the sky as it gradually gets darker and then fades into night… 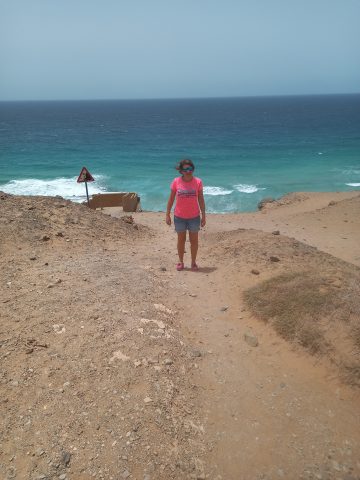 El Cotillo is a great place to holiday, or just to visit, it is not too busy, has a great range of restaurants, bars and entertainment without being over commercialised.

How to get there

By Car take the main road to Rosario then leave the motorway at the second junction, sign posted La Oliva and Lajares. Alternatively there is a regular and cheap bus service. The No 8 bus from the top of the main street takes about 40 minutes and is less than 3€, or you can cycle it. There are various routes you can follow by bicycle. Cycle out the main road to  Tamaragua (Capellania), then head south from the housing estate to the roundabout, where you join the main road to Lajares and El Cotillo, there is a cycle path most of the way.  If you have a mountain bike you can go on the North Shore Road, this is a shorter route. From Corralejo the North shore road starts by the water treatment plant – head for the wind turbines, then just follow the track. This will take you to Majanicho where you have a choice, either continue on the track, or go on road to Lajares where you can join the cycle path to El Cotillo. It will take between 1 – 2 hours, but well worth it.